The Escola Superior de Conservació i Restauració de Béns Culturals de Catalunya (ESCRBCC)  was set up in 1991 by the Generalitat de Catalunya in response to the evolution in the preservation and restoration sector due to scientific and technological advances.

The ESCRBCC was conceived during the years prior to the celebration of the 1992 Olympic games in Barcelona, at a time when work to restore buildings and monuments in the city was increasing.

The embryo was a series of specialised courses in preservation and restoration and initiatives dedicated to the preservation of stone organised by the Escola d’Arts Aplicades i Oficis Artístics “Llotja” in Barcelona.

The success of these courses motivated the Generalitat de Catalunya to introduce the specialised course in Preservation of Sculptural works regulated by the Decree dated 14th of March 1989, at the “Llotja” school.

Finally, on the 25th of November 1991, the Escola Superior de Conservació i Restauració de Béns Culturals de Catalunya was created when the “Llotja” school was split in two.

Once the school was created and after months of work, the Generalitat de Catalunya, by means of Decree 224/1993 of the 27th of July, approved the curriculum and regulated the training courses in preservation and restoration in Catalonia.

The curriculum was based on three courses (one general and two specialised) requiring an attendance of 32 hours per week and consisted of 8 to 10 subjects per course.

This study plan was phased out at end of the 2011-2012 academic year. During the years it was taught, 697 students qualified.

From September 2010 a new study plan to be taught over four academic years was introduced and adapted to meet European Higher Education Area requirements.

This new study plan is structured around two general courses and two specialised courses and is equivalent to 240 ECTS credits.

The ESCRBCC has been based in the same building since 1991, an old primary school in the Trinitat Nova area of Barcelona which, at the end of the 1980s, was converted into one of the main buildings of the then Escola d’Arts Aplicades i Oficis Artístics “Llotja”.

The building was constructed by the celebrated architecture practice MBM Architects and until it was converted to form part of the “Llotja” school, was a local authority School called Grupo Escolar Ramiro Ledesma.

The Josep Martorell and Oriol Bohigas’ project, dated 1957 is one of the early works from this prestigious architects’ practice.

It is from the early period of the practice when several methods of construction were introduced and which were then developed in the construction of other schools. 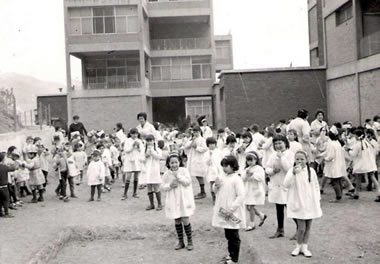 View of the playground of the ESCRBCC in 1963 when it was the Ramiro Ledesma local authority school (Photograph courtesy of M. Dolores López Sánchez). 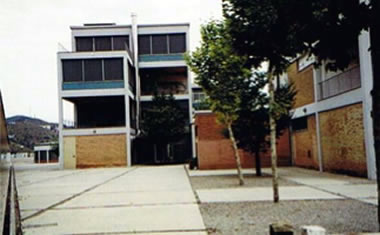 In order to adapt the infrastructure of the old school to transform it into a higher education centre, it was necessary to reform and extend the building, work which began in the summer of 1993 and which was carried out over several phases.

The final phase was finished on the 13th of October 1998. The extension work consisted of the construction of 8 preservation and restoration laboratories, 2 sculpture and moulding workshops as well as other ancillary departments (stores and carpentry workshop).

As regards the renovation work, the old primary school building was converted into an auditorium, whilst buildings A and B became home to 7 classrooms and several services (library, archive, administration department, offices, cafeteria, reception and vestibules).

The façades and the roofs of the old buildings were also refurbished and the former playground was landscaped.

The architects for this project were Lluís Arboix de la Torre and Jesús-María Parra Garriga.

The Project Managers were Gestión de Infraestructuras SA (GISA) and the construction company was SAPIC.

Finally, on the 9th of April 1999, the Hon. Jordi Pujol Soley, President of the Generalitat de Catalunya, inaugurated the ESCRBCC. 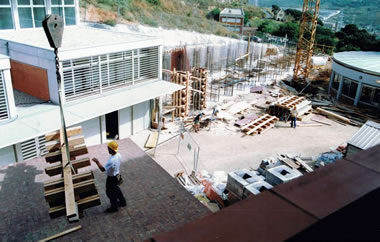 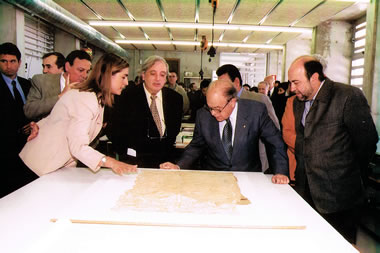 Inauguration of the ESCRBCC renovation and extension work by the Hon. Jordi Pujol. Front row and accompanying the President of the Generalitat de Catalunya, from left to right, Prof. M. Àngels Balliu, the Director of the ESCRBCC Xavier Figueras and the Councilor of Education Francesc Xavier Hernández (Photograph: ESCRBCC).

Given the characteristics of the training, the ESCRBCC works closely with many cultural institutions of note. However, it must be pointed out that between 2001 and 2009 the ESCRBCC restored the coffered ceiling of the Sant Miquel de Montblanc church over the course of several summers. As a result of this, Montblanc City Hall awarded the ESCRBCC a silver medal in a ceremony which took place at the Sant Miquel church itself on the 16th of April 2010. 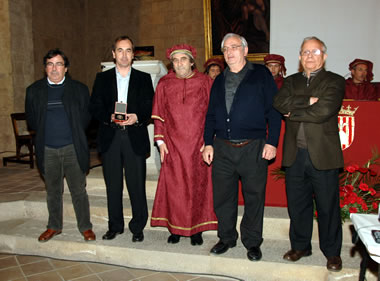